The Essence of Social Media in Online Marketing 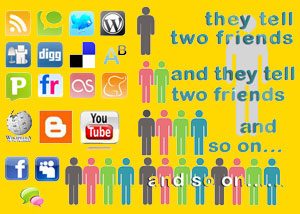 Suppose you’re planning to promote your business products and services through the internet, and you have thought of social media as an effective tool. Sure, that’s a great idea, but do you fully understand the real meaning of “Social Media,” and its significance? If you haven’t – maybe you should, as you may be missing out on a potential goldmine. We’ll take a look on its definition to give you some idea.

Social media are social communications with the use of media as bridges. They use web – based technologies, like applications for example, to broadcast social media dialogues. In general terms, Andreas Kaplan and Michael Haenlein define social media as a group of Internet-based applications that build on the ideological and technological foundations of Web 2.0 (Wikipedia). For those who are unfamiliar with Web 2.0, it is commonly associated with web applications that aids information sharing, the ability to operate, user focused design, and the association with the World Wide Web. Social media allow the creation and exchange of user-generated content to other users. On the other hand, social media, in business terms, are referred as User-Generated Content or Consumer-Generated Media. They are different kinds of media content, available to the public. Utilising social media is accepted as a driving force in capturing the attention of the people, utterly known as social media marketing (SMM).

Social media marketing is a method of promoting your site or business through social media channels, like YouTube, Facebook & Twitter. It is a powerful strategy that will get you links, attention and massive amounts of web traffic (visitors to your site).

Users which ignore social media can be classified into 3 categories. It was mentioned earlier that you might be unaware of the nature of social media. This makes you to fall under the first category which includes people who are totally clueless about it. The second would be those who lack knowledge in using social media. The last would be people with disbelief or poor interest in the value of the strategy.

Now, let’s find out the social media’s benefits. Developing links which could bait visitors plus getting it popular throughout the media website will assure you primary and secondary traffic. The primary traffic is a large amount of visitors coming directly from social media websites. Secondary traffic is referral from sites which have been linked and sent to you. Therefore, with optimisation, these links can gain trust from search engines, ranking for competitive keywords and further gaining more visitors. A website receives a large number of natural, permanent links from trusted domains. This may call to the development of authority. Obtaining these links with permission from the domain refer to as borrowed trust. It’s a benefit in which the visitors will think the article is worth checking out; as it turns out that it’s located on a well – known site.